Gravity separation is a historic mineral processing method, which plays an important role in the ore beneficiation. It is used to separate the useful minerals and gangue in the ore, so as to obtain the products that meet the smelting requirements or further processing. Gravity separation method has the advantages of low cost, quick effect and less pollution, so it plays an important role in developing the mineral resources, reducing energy consumption and improving the economic benefits of smelting. 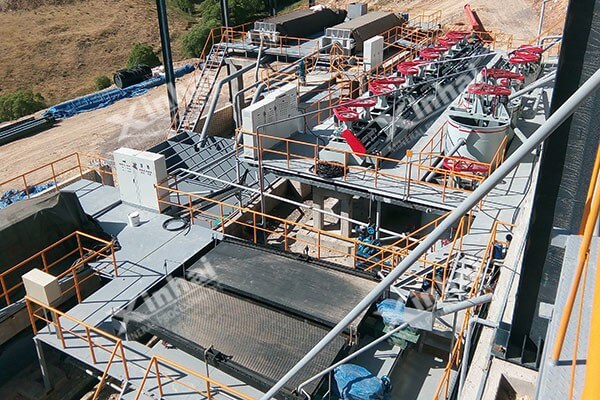 What Is Gravity Separation? 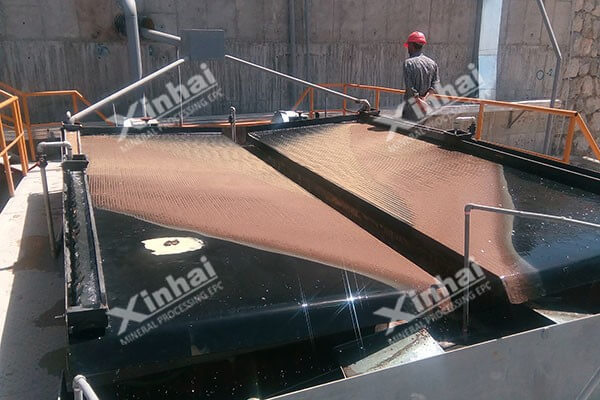 01What Is Gravity Separation?

The essence of gravity separation can be summarized as the “dispersing-layering” and “transferring-separating” processes. The bulk materials placed in the separation equipment become dispersed driven by the buoyancy, power or other mechanical force in the moving medium, and due to the different motion state during sedimentation, the ore with different density (or particle size) is getting layered and transferred. Gravity separation method is to achieve layered process by mineral density and to achieve separation by the action of the moving medium. The basic law of gravity separation process can be summarized as follows: “dispersing-layering-separating”.

The gravity separation method has the characteristics of simple equipment structure and low operation cost, so it can be used when the conditions are suitable.

2. In the ore dressing production, gravity separation method does not consume expensive chemicals and the environmental pollution of tailings discharged is small.

3. Using gravity separation method, we can discard the block rock and coarse tailings, and recover the weak magnetic mineral with coarser grain size;

4. Gravity separation method can be used as combined method with other mineral processing methods to recover weak magnetic minerals with fine grain size.

1. The separation of precious metals such as gold and platinum;

2. The separation of tungsten ore and tin ore;

3. It is widely used in the treatment of sand minerals containing rare metal elements, such as the separation of seashores and ore containing zirconium ore and titanium ore;

4. The separation of hematite and limonite;

5. The separation of manganese ore;

6. The separation of coal and vermiculite in the coal preparation plant;

7. Separation of some non-metallic minerals from gangue, such as asbestos, mica, kaolin, sepiolite and diamond;

8. For the non-ferrous metal ores such as copper,lead and zinc which are mainly processed by flotation, the gravity separation method is a common beneficiation process for pre-concentration.

9. The separation methods according to particle size used in gravity separation, such as classification,de-sludge, etc., are indispensable operations in almost all mineral processing plants. 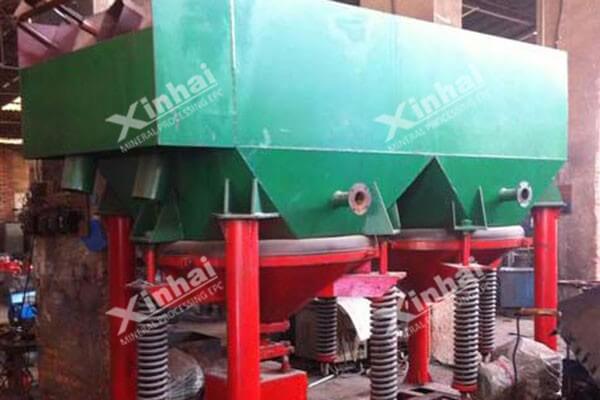 Shaking table separation is the process of separating the ore particles based on mineral density by means of the combined action of mechanical shaking and water flushing. Shaking table is the main equipment for the gravity separation plant. It is characterized by high ore ratio and are commonly used to obtain the final concentrate and meantime to separate the final tailings,which can effectively process the granular materials. The upper limit of separation particle size is 3 mm,and the lower limit can be up to 0.4 mm if tin and wolfram are separated. Shaking table separation is mostly used to separate materials less than 1 mm. 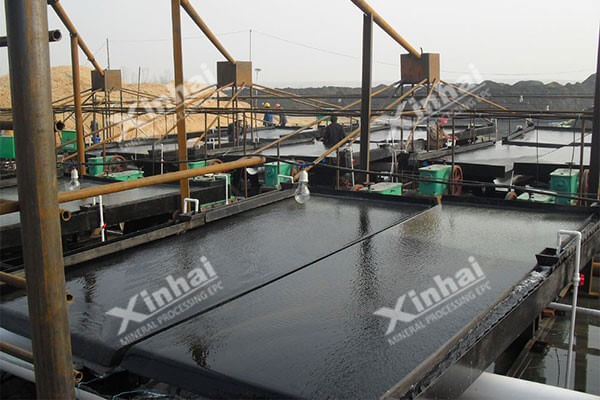 The chute separation is a separation process making use of a beveled water flow. The mixture of ore particles is fed into a chute with a small inclination angle, generally 3 to 4 degrees and not more than 6 degrees. The ore particles are layered by the combined action of the momentum of the water flow, the gravity, centrifugal force and the frictional force of the ore particles. Since the velocity distribution of the water flow in the trough is small in the upper and lower layers, the denser ore particles are concentrated in the lower layer, and are subjected to less water flow force and larger groove bottom friction force, and slowly move forward along the groove bottom. While the ore particles with smaller density are concentrated in the upper layer and are carried by the water stream to flow out of the tank at a faster rate. Then, the two products with different density, namely concentrate and tailings, can be obtained by intercepting the layers separately.

According to the force exerted by the ore particles,the chute can be divided into gravity chute and centrifugal chute; according to the selected particle size, the chute can be divided into coarse chute, ore chute and slime chute. The coarse-grained chute is often replaced by a gravity separation jig because it requires large number of manual operations. The coarse-grain chute and the ore sand chute are mainly used for the sand ore of gold, platinum and tin and other rare metal ore, such as monazite, zircon and other sand ore. The slime chute is often used for some ore gravity separation,like tungsten ore and tin ore. 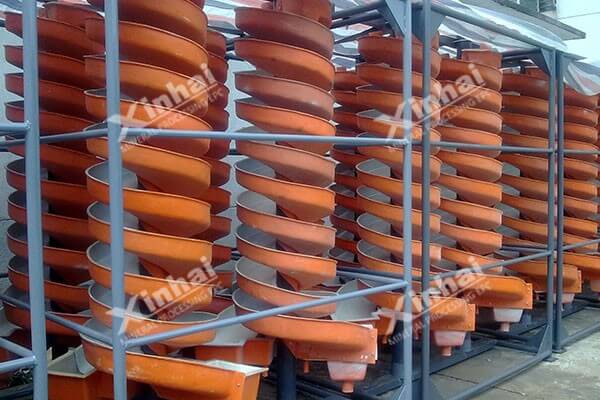 The separation effect of heavy medium gravity separation is mainly determined by the density of the ore particles, and the influence of the size and shape of the ore particles is small, so the separation precision is relatively high, the minerals with a small difference in density (such as 0.1 g/cm3) can be well separated. Material size range can be wide and processing capacity is large. 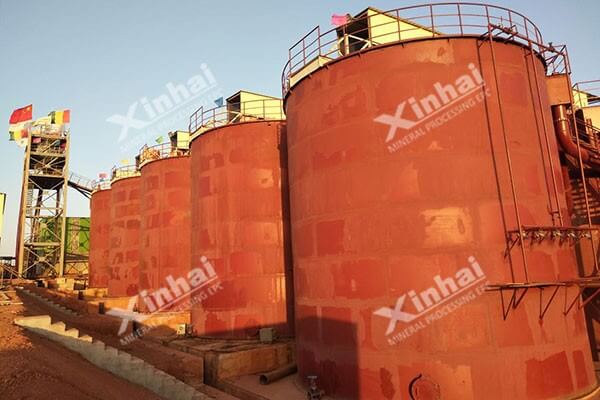 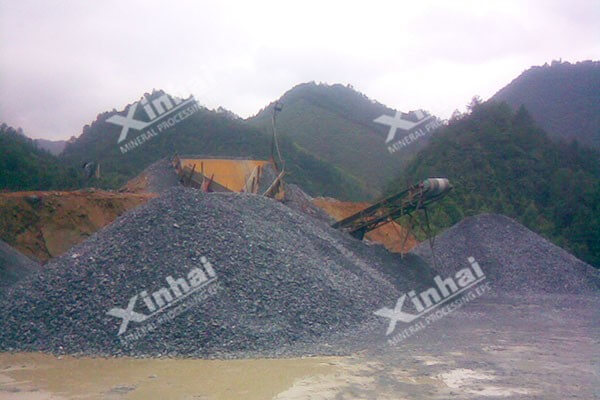 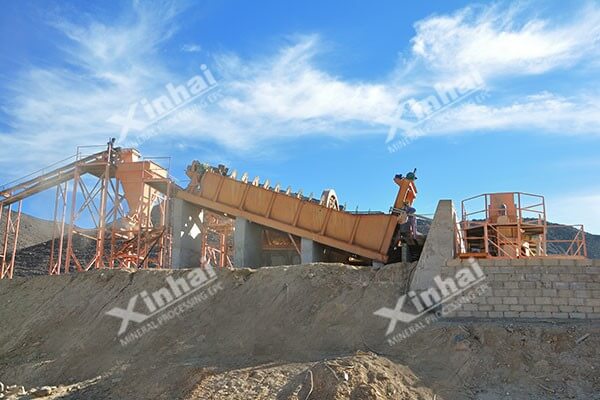