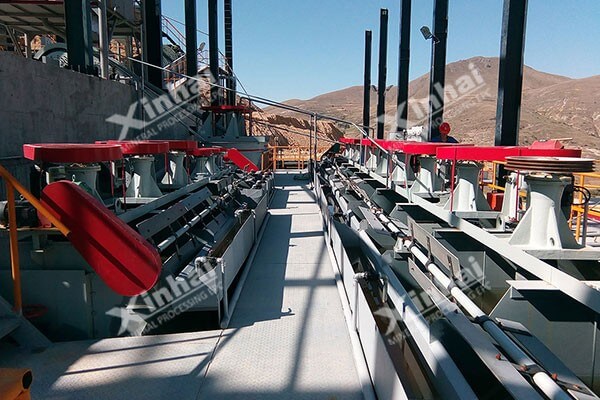 What is the flotation cell?

Flotation cell is a kind of flotation separation equipment and one of the common chemical dressing equipment, which mainly separates the mineral by relying on the buoyancy of flotation froth through fitting in with the flotation reagents. 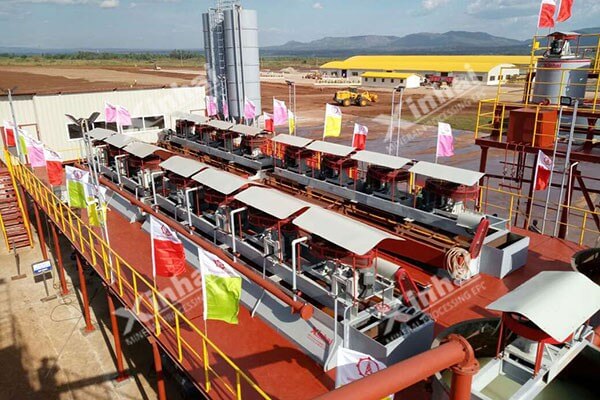 01What is the flotation cell?

03What is the working principle of flotation cell?

1. Pre-flotation: mainly grinding operations -- Crushing the ore and then grinding it fine so that the swimming minerals can be dissociated from other minerals or gangue minerals;

2. Flotation operation: The dissociated minerals are sent to the flotation cell to be added by mixing slurry to make the slurry concentration suitable for the flotation requirements, and the required flotation agents are added to improve the efficiency; Then the pulp in the flotation cell through the air flotation, complete mineral separation.

3. Post-flotation: Dewatering and separating the foam product and tailings product after flotation.

1. The pulp is composed of solid mineral particles and water. Using the appropriate flotation agents in the agitation tank for pulp concentration allocation, so as to achieve the flotation requirements.

2. The main purpose of using flotation agents is to increase the hydrophobicity of the mineral surface to float, or to make the minerals not to be floated more hydrophilic.

3. Put the pulp into the flotation cell, the pulp and the air is inhaled into the flotation tank at the same time, the rotating impeller air is pulp turbulent motion break into many froths (adding frother can promote the formation of froths smile and dispersed), air froths in the pulp and the ore grain collision or contact, and according to the surface hydrophobicity of difference to determine whether particles adhesion in froths on the surface, the surface hydrophobicity of ore grain adhesion to the surface of the froths, carried raw float to the pulp page form froth layer, and then be hung as concentrate. And the surface hydrophilic strong particles and froth sattached, still remain in the slurry, be discharged into tailings outside the tank.

What is the working principle of flotation cell?

When the mechanical agitation type flotation cell works, the slurry and flotation reagents will be delivered to the bottom of the first chamber after fully mixing. The impeller of flotation cell rotates and forms the negative pressure in the cavities, which makes the slurry on the tank bottom and slurry on the tank respectively bring into mixed zone through the upper and under suction, and make the air enter into the mixed zone along the sleeve, so the pulp mixes with air here. Under the centrifugal force of impeller, the mixed slurry is sent to the mineralization zone, and the air forms the bubble then is shattered, and contact with the ore grain to forma the mineralized froth. Under the action of the stator and the turbulent flow plate,the mineralized froth evenly distributes in the cross section of tank, moves up into the separation zone and forms the froth layer, which will be discharged by froth scraper and becomes the froth concentrate.

The unmineralized coal particles above the bottom of the tank will be mixed, mineralized and separated again through the circulation hole and the upper suction port. Part of the pulp under the tank that is not inhaled by the impeller of the flotation cell enters the tank under the second chamber through the middle ore box buried in the pulp. After completing the whole process of the first chamber, it enters the third chamber.Each tank flotation cell repeats the operation until the mine enters the last chamber after the flotation and enters the tailings box to discharge the final tailings.

Due to the combined action of the impeller,cover plate and central cylinder of flotation cell, a certain amount of negative pressure is generated in the impeller blade, so that the medium ore froth and feeding ore flow into the central cylinder through the medium ore pipe and feeding ore pipe, and then enter into the upper impeller blade, and finally discharged from the outer edge of the lower impeller blade. The pulp discharged from the outer edge of impeller under the blade tip and air mixture and impeller blade tip discharge of middlings and feed after installed around the impeller of the stator current and orientation, into the groove of the main body in the pulp, mineralized bubbles rise to the surface of the pulp forming foam layer, pulp part of return under the impeller blade between recycle, the other part through the slot on the partition into the next slot in the circulation of hole seeding or as a final product.

When the impeller flotation machine works,the pulp is sent to the impeller from the pulp pipe, then thrown into the slot under the centrifugal force generated by the rotating impeller, then the negative pressure is formed under the cover. The suction air mixed with the pulp together in the upper part of the impeller and then be thrown into the slot, producing negative pressure again. In the slurry, the floating minerals are brought to the surface by the froths to form a mineralized froth layer, and scraped out by a scraper to get concentrate. Other minerals and gangue enters into the middle chamber through the gate on the side wall of the channel and be fed into the next flotation slot. The pulp level in each or several slots can be completed by adjusting the upper and lower gates, and the pulp finish the circulation process in the flotation cell.

Due to the strong agitating and mass ejection function of the flotation wheel, the pulp mix with the air fully. This mixture pushes ahead first under the effect of inclined rod wheel of flotation wheel, then distributes continuously and evenly by the guide effect of gland and arc plate current stabilizer, and rises towards pulp surface from agitating zone to separating zone under the reflex action of slot bottom, slot wall and the steady flow role of arc plate. The flow path of the mixture is in a"W" shape if seen from the longitudinal section of the slot. Its flow characteristic extends the range of mixing zone relatively and reduces the range of subdivision relatively. In addition, the shallow slot makes the range narrower. The former increases the contact chances between the ore particles and froths, which is beneficial to the mineralization of the froth. The mineralized froth rises to the froth zone and is scraped out by a scraper as the froth product.

The working principle of suction slot is the same as the principle of vertical sand pump. The rotary lifting wheel produces the pressure head, and the pulp is sucked from the guide pipe on slot bottom and lifted to the required height.

Flotation cell must be able to pressure full amount of air into the pulp and produce a large number of moderate size froths,then the bubbles should also be evenly dispersed throughout the flotation cell.The better the agitating performance is, the better the air dispersion is, and the more even the air froths distribute, so the ore particles can contact the air froths fully, and the process performance of flotation cell is better.

The mineralized froth layer can not only retain the target mineral, but also make part of the mixed gangues fall off from the froth, which is beneficial to the "secondary enrichment". Besides,adjusting the pulp level can control the flow rate of pulp and the thickness of the froth layer.

In the design of modern flotation cell, the automation of mineral processing plant requires not only reliable flotation cell, durable parts, but also the program simulation and remote control capability.

1. Select the flotation cell according to the ore properties

2. Select the flotation cell according to the size of mineral processing plant

3. Select the flotation cell according to the separating degree

Generally, flotation can be divided into cleaning,roughing and scavenging, of which, the purpose of cleaning is to improve the concentrate grade, so the froth layer should be thinner, which can make the gangue separated easily. Better not to choose the flotation cell with a large charging.

Flotation cell was first originated in China's Ming dynasty, which was used in medicine and metallurgy industry. Relying on the natural hydrophobicity of mineral surface to purify the mineral drugs, the fine mineral powder would float on the surface, and separate from the sinking gangue. At the end of the 19th century, in order to improve the mineral separation, the flotation process was clearly proposed due to the increasing demand for metallic minerals.

As the air is supplied by an external fan,the inflating volume of the air-inflation mechanical agitation flotation machine can be adjusted by the valve according to the requirements of flotation production.The impeller, which only acts as an agitating impeller, has a low rotating speed and weak agitating effect, so it is not easy to produce slime phenomenon for floating the brittle minerals; and the slurry surface is relatively stable,and easy to form a stable foam layer, which is conducive to improving the separating index. Because the rotating speed of impeller is low and the pulp flows by the gravity, the power consumption per unit is low, the service life is long, and the maintenance cost is low.

Because the air-inflation mechanical agitation flotation machine cannot achieve self-slurry suction,the return of middle products needs pump lifting. And the air supply equipment needs to be equipped, which is not easy to manage. Therefore, air-inflation mechanical agitation flotation machine is often used to deal with the simple roughing and scavenging operation.

The features of flotation column are simple process flow and structure, low power consumption, less wear parts and easy to operate and manage. However, the aerator of flotation column is easy to be blocked due to calcium formation in the alkaline pulp. Therefore, the flotation column is more suitable for the roughing and scavenging of those free-milling ores with simple composition and high grade.