The Summary of Flotation Reagent

There are as many as 8,000 kinds of flotation reagents in application, among which 100 kinds are commonly used. Flotation reagents are generally classified into flotation collectors, foaming agents, activators,inhibitors, and conditioners depending on their use.

Classification and Application of Flotation Reagents:

Purpose: To change the hydrophobicity of the mineral surface so that the floating mineral particles adhere to the bubbles.

As a kind of flotation agents, the activation of activators can be roughly divided into spontaneous activation, pre-activation, revitalization and vulcanization.

Spontaneous activation: When processing non-ferrous metal ores by grinding, the mineral surface reacts spontaneously with some soluble salt ions. For example, when zinc blende co-exists with copper sulfide, because of the oxidation after ore mining, there is always a small amount of copper sulfide oxidized to copper sulfate. Cu2+ ions in pulp interact with the surface of sphalerite to activate itself, which makes it difficult to separate copper and zinc. So adding regulators such as lime or sodium carbonate precipitates certain "unavoidable ions" that may cause activation.

Pre-activation: It refers to the activation of a certain mineral in advance by adding an activator. When the pyrite is heavier oxidized, the oxide film of the pyriteon the surface is dissolved by sulfuric acid before the pyrite is processed to expose the fresh surface to facilitate flotation.

Revitalization: It refers to a mineral that has been previously suppressed. For example, sphalerite suppressed with cyanide can be revived by copper sulfate.

Vulcanization: It means that the metal oxide ore is first treated with sodium sulfide to form a film of metal sulfur mineral on the surface of the oxidized ore, and then floated with xanthate. 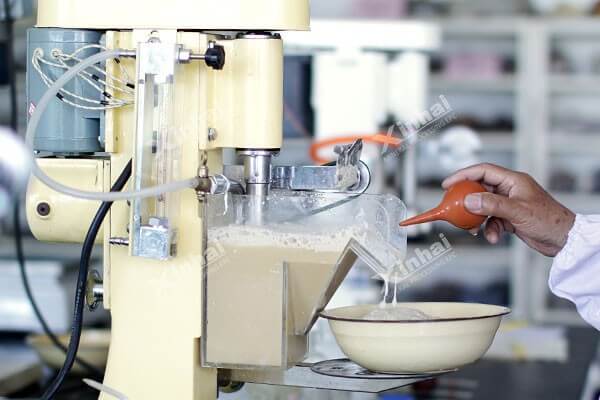 01Classification and Application of Flotation Reagents:

03How to Use Flotation Reagents Correctly?

How to Use Flotation Reagents Correctly?

According to the effect of the agents, the flotation reagents are mainly divided into three categories: foaming agent, collecting agent and metabolic modifier.

(1)   Foaming agent: the organic surface active substance distributed on the air-water interface, such as pine oil, cresol oil, alcohol, etc. The function is to create a foam layer that floats minerals.

(2)   Collecting agent: Its function is to collect the targeted minerals. The floating mineral particles adhere to the bubbles by changing the hydrophobicity of the mineral surface. According to the nature of the agents, they can be divided into non-polar collector, an ion collector and cation collector. Common collecting agents are dithiophosphate, xanthate, thiodiphenylurea, fatty acid, aliphaticamine, mineral oil, etc.

The general dosing sequence of the flotation reagent in flotation plant is as follows:

For raw ore flotation process, the dosing sequence of the flotation reagent should be: pH adjuster, inhibitor or activator, foaming agent, flotation collector;

For the inhibited minerals flotation process, the dosing sequence of the flotation reagent should be: activator, flotation collector, foaming agent.

In order to improve the efficiency of the flotation reagent, the following measures can be taken:

(1) Some water-insoluble flotation reagents can be dissolved in a special solvent;

(2) A solid flotation reagent that is not easily soluble and can be formulated into an emulsion;

(3) For fatty acid flotation collectors,saponification is the most common method;

(4) After emulsification of fatty acids and diesel oil, they can increase their dispersion in the slurry and improve their effectiveness;