When the froths show up, we can observe some phenomenas such as: empty and full, size, color, glossiness, shape, thickness, hardness, liquidity, voice and so on. These phenomenas depend on the type, amount, size, color of the ore on the froths and the type and number of frothing agents.

1. The Empty and Full State of Froths in the Flotation Cells

2. The Size of Froths in Flotation Cells

The size of froths varies from the characteristics of ore, agents and the size of flotation area. Different ores and different flotation flow create different size of froths. The size of froths is concerned about mineralization of ores. Middlings have a good mineralization. If over-mineralized, the froths can't merge each other, creating abnormal small froths. If weak-mineralized and the froths merge too much, big froths would be created, which is easily bursting when the surface waves. Small froths usually show in scavenging. Too much frothing agents can also make froths small.

3. The Pulp Color in the Flotation Cells

4. The Glossiness of Froths in Flotation Cells 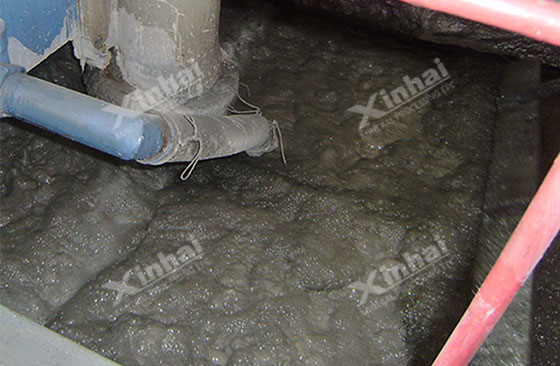 5. The Clearness of the Froth Shape in Flotation Cells

When moderately hydrophobic granular mineralized froth is shaped on the surface, the pulp has enough water and the shape of froths are relatively clear. The froths can stay long time on the surface of pulp and the minerals have large hydrophobic.

6. The Thickness of Froths in Flotation Cells

The thickness of froths directly influences the recovery rate and the concentrate grade. It is mainly concerned with the number of frothing agents and the degree of froth mineralization. The froth is thick when there is a large raw ore grade, a good mineralization or many froth agents. If the granule of ore is too large, thick froths can't be formed. The slurry level would be low, the froth layer would be thick and the concentrate grade would be high. If there is a high slurry level, frothed minerals can be scraped in time. The froth layer would be thin and the recovery rate would be higher.

7. The Brittlement of Froths in Flotation Cells

If the froths have high brittlement, they would be unstable and easy to burst, sometimes even hard to be scrapped. On the contrary, too many viscous froths  stable froths will destroy the normal flotation process and lead to concentrate transport difficulties, and will also affect the concentrate grade or recovery rate. Excessive flotation agents, slime or large amounts of soluble salt can all make the froth too stable.

8. The Voice of Scraping Froths in Flotation Cells

When scraping the froths, rustle can be heard. It means there are large amount of large proportion and large granule minerals on froths. It is normal.

These are the eight aspects which can be reference as how to judge the flotation effect through froths in flotation cells. Although the froths varied from the size of flotation area, there still are specific phenomenas in specific area. We should pay close attention to the state of froths, so we can reach better recovery rate.

Last: How to Extract Nickel From Copper-Nickel Sulfide Ore?

2How To Do Flotation Test?

34 Aspects Should Be Noticed in Flotation Process