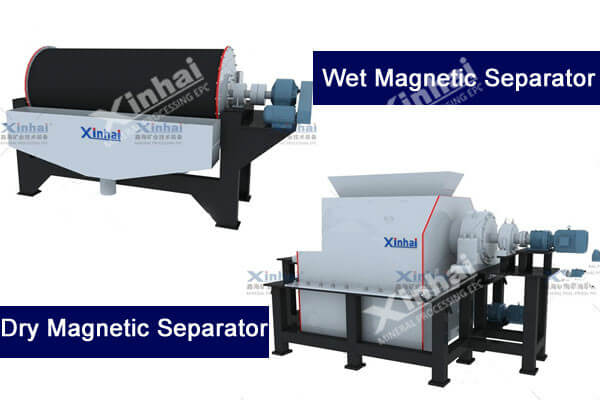 The magnetic pulley is used for the pre-selection of block ferromagnetic ore. It is generally used after the crushing of the raw ore coarse grain or before the final broken product into the grinding machine, during which the waste rock can be removed and the ore grade can be improved, thereby reducing the grinding cost.

The induction roller magnetic separator consists of an electromagnetic system, a sorting system and a transmission system. It can be used to recover ilmenite in coastal sand mines, or to sort mixed concentrates such as chromite, monazite, wolframite and iron ore.

Dry electromagnetic disc type strong magnetic separator is mostly used for the selection of rare metal coarse concentrate. It is used to separate the weak magnetic ore with magnetization coefficient greater than 5.0*10-7m³/kg and particle size less than 2mm.

The dry-type roller type strong magnetic separator has two magnetic roller relative arrangements, which constitutes a closed magnetic circuit and is driven by a turbine speed reduction mechanism. It can be used for sorting materials containing a plurality of different magnetic minerals with the particle size of 3 mm or less.

Semi-reverse flow magnetic separator has high concentrate quality and metal recovery. The ore slurry is loosely suspended from the tank below the separation space. The direction of the slurry movement is basically the same as the direction of the magnetic field force. Therefore, the ore particles can reach the surface of the cylinder with high magnetic force, and the tailings are discharged from the tailing hole on the bottom plate. The overflow surface height maintains the level of slurry in the tank. The semi-reverse flow magnetic separator is widely used for roughing and selecting operations of fine magnetic ore (less than 0.2mm), and can be used in combination to improve the concentrate grade.

The selection of magnetic separator is a comprehensive problem that needs to be considered in many aspects. If you want to know exactly which magnetic separator should be used, you need to go through a series of processes such as mineral processing test or consult a professional manufacturer. Then choose the suitable one according to the specific conditions of different mines.

Next: Influence of Hydrocyclone Structure on Classifying Effect

13 Factors You Must Know That Affect Magnetic Separator Performance

2What Are The Factors That Affect Magnetic Separator's Efficiency?

3Classification and Application of Magnetic Separators

Ball Mill: Is the Grinding Fineness the Finer, the Better?