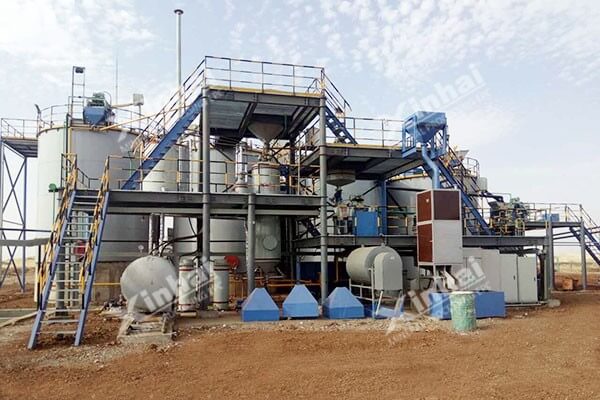 Commonly used gold cyanidation methods include carbon in pulp (CIP), carbon in leaching (CIL), pool leaching and heap leaching. Though there is only one word difference literally between them, there are huge differences in the actual process.

The pool leaching method is more suitable for ore that has a certain degree of oxidation and requires a longer leaching time. It can also be used in some gold mines that’s small-scale but not suitable for the construction of a whole dressing plant. In the gold ore dressing plant, these two methods can be used to separate tailings and recover gold from tailings to increase recovery rate.

In summary, we can sort out the advantages and disadvantages of these four gold cyanidation methods as follows:

There are no two same mines in the world, and proper gold cyanidation methods varies from different ore conditions. Take a gold processing plant in Tanzania as an example, the gold ore in this mining area is mainly composed of sulfide ore and oxidized ore. After the dressing test, it is determined that all-sliming cyanidation method is the core. After the gold extraction process, the final oxidized gold leaching rate reached 93.75%, and the sulfide gold leaching rate reached 91.58%.

It turns out that even though there are so many common gold cyanidation methods, it’s better not to adopt any single method casually. Before determining the process,it is necessary to do a full beneficiation test to determine the appropriate gold cyanidation method according to the quality of different ores.

14 Hazards of Gold Mine Tailings

33 Methods for Extracting Gold from Leaching Solution in Cyanidation Plant