Gravity separation process is a common mineral processing method. According to the differences of mineral density and particle size, the minerals are loose and layered by relying on the fluid power and mechanical force, thus obtaining the products with the different density or particle size.

Apart from various gravity separation equipment, the medium(air, water/heavy liquid or suspension) is also the necessary factor for the gravity separation process. Under the effect of gravity (the centrifugal force is the main force in the centrifugal field), mechanical force and medium, the particle sizes with different density will produce different movement speed and movement, so as to realize the separation.

Jigging dressing refers to the separate the material according to the density difference under the vertical lifting variable speed medium flow.

In the jigging dressing, the water movement includes the vertical lifting variable pulsating flow and horizontal flow. For the vertical rising water in the jigger, the different particles have different moving speed. The heavy minerals are behind those light minerals in the rising process, and when the ore grain is in the reverse movement, the heavier particles fall down with a larger velocity in the static or falling water, thus forming the layering between light and heavy ore grains: the particles with large density are in the lower layer, while the particles with small density are in the upper. 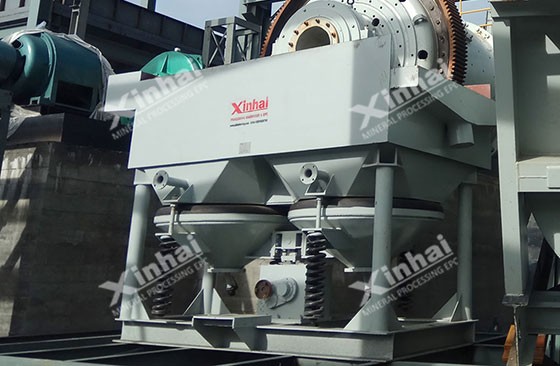 According to the equipment structure and water movement mode, the jigger used in the jigging dressing can be roughly divided into the following types: piston jigger, diaphragm jigger, air pulsation jigger, moving screen jigger. Among them, diaphragm jig is often applied in the metal mineral processing plant.

The shaking table dressing is to use the combined action of asymmetric reciprocating motion of shaking table and the water flow of the thin inclined plane to separate the material according to the different density. The shaking table is common equipment in the gravity separation concentrator, and it is the featured with high enrichment ratio, easy to obtain the final tailings while separating the finial tailings and effectively deal with granular materials. 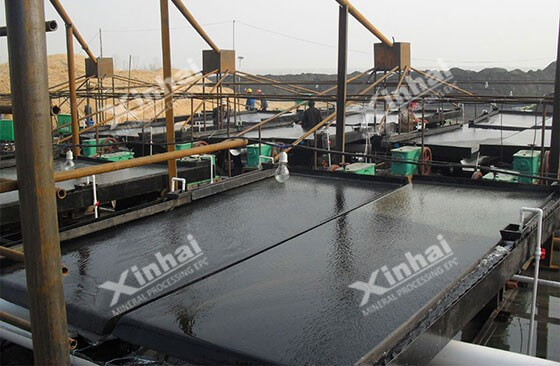 As an efficient gravity separation equipment used to separate fine ore, the shaking table is widely used for dealing with tungsten, tin, tantalum, niobium and other rare and precious metal ores. Besides, the shaking table can also be used for the extraction of iron ore and manganese ore.

Chute separation is to separate the material by using the water flow in the chute. The slurry is sent to the chute with a certain inclination angle, the ore particles finish the laying under the action of the water flow momentum, the gravity and centrifugal force of ore particle and friction force.

Because the velocity distribution of water flow in the trough is large at the top and small at the bottom, the ore particles with a higher density are concentrated in the lower layer, and move forward slowly along the bottom of the trough due to the less momentum of water flow and the greater friction at the bottom. The ore particles with lower density are concentrated in the upper layer, and are carried by the water flow to flow out of the trough at a faster speed. Then, two products with different densities can be obtained by blocking the flow by layers, namely, concentrate and tailings. 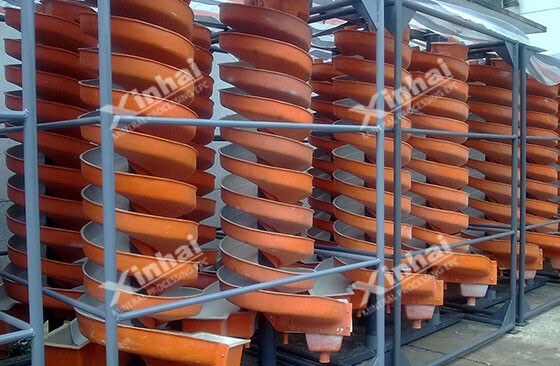 ● According to the force exerted on the ore particles, the chute can be divided into gravity chute and centrifugal chute.

Dense media dressing is mainly determined by the grain density of the ore, while the grain size and shape of the ore have little influence on the dense media separation, so the separation accuracy is relatively high, and the density difference that can be separated is small (such as 0.1g/cm3), the range of the feeding size is large, and the processing capacity is large.

In general, the dense media dressing has the features with coarse particle size, large processing capacity, strong adaptability to the change of feeding, high dressing index and low dressing cost. However, slime and fine grains should be removed before the ore is separated, and the dense media dressing should be equipped with medium preparation and medium purification & recovery system.

● Hydraulic classification is the process of dividing the wide-grade particle group into two or more narrow-grade groups according to the different settling velocity of ore particles in the water;

Gravity separation process is favored by many concentrators because of its low production cost, simple equipment structure, low environmental pollution and strong applicability. It is suggested that the mine owner should carry on the mineral processing test first, and determine the ideal gravity separation process flow according to the test result.

Last: Why Does the Linear Vibrating Screen Cannot Convey the Materials Smoothly and Discharge from One Side?

Next: Which Kind of Gold Mining Process You Should Choose?

25 Factors That Affects the Jigging Process