Thickener is a continuous enrichment and clarification equipment. It is mainly used for concentrate dehydration and tailings dehydration in wet dressing operation. At the same time can also be used for chemical, water, sewage and other solid slurry concentration and purification operations. 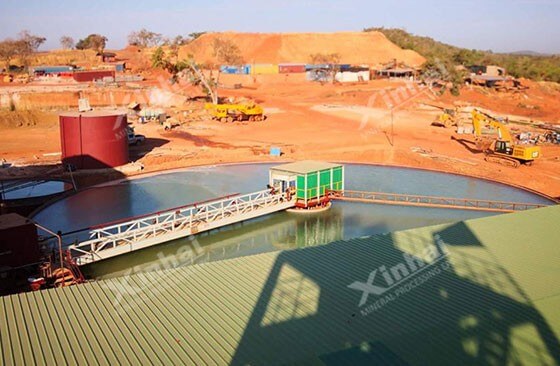 Their structures are made of circular concentrator and harrow concentrator. the peripheral transmission thickener and center driving thickener harrow frame motion tracks are the same, both circular motion.The principle is gravity sedimentation, suspended in the slurry in the concentration pool under the action of gravity. The upper part is clarified water, directly from the concentration pool along the overflow, sink in the bottom of the solid particles with a rake concentrator continuously scrape it to the discharge port, so that the solid liquid separation.

Peripheral transmission thickener adopts steel bar cross frame to support the harrow frame. Combine the cross frame support and rake frame as one. The harrow frame has good rigidity and great intensity. However, the frame structure will be higher than the water surface in the working process, which will agitate the clarification area and affect the material settlement and overflow water quality.

Thickeners are used for dewatering of concentration and tailings. But its use environment is not the same.

Peripheral drive thickener is a more common large thickener equipment, the diameter is usually more than 50 meters, the largest can reach 100m.

The above is the comparison between the two peripheral transmission thickener and center driving thickener. Special attention should be paid to choosing the appropriate thickener according to the actual plant selection. At the same time, it is recommended that all mine owners look for equipment manufacturers with overall qualifications to purchase concentrators.Obtaining a higher return on investment, while ensuring that the overall cost of the concentrator does not increase.

Last: What Are the Requirements for Ball Mill Testing, Start and Stop?

Next: Daily Maintenance and Cleaning of Flotation Cell