Manganese ore is an essential mineral in modern industry. Especially in the iron and steel industry, the amount of manganese ore used is as high as 90-95%. Since most manganese ores are fine-grained or micro-fine-grained, and there is a considerable amount of high phosphate ore, high iron ore, and symbiotic (associated) beneficial metals, it brings great difficulty to the beneficiation.

The common components in manganese ore beneficiation are manganese oxide and manganese carbonate.

Washing is a method of separating the ore and mud from the raw ore under the action of hydraulic, mechanical and self-friction, thereby improving the grade of the ore. The main factors affecting the washing effect are the physical properties of the mud, the type of ore, the strength of the mechanical force and the time.

Manganese oxide ore is generally washed one or more times with a double spiral trough washing machine with strong scrubbing. 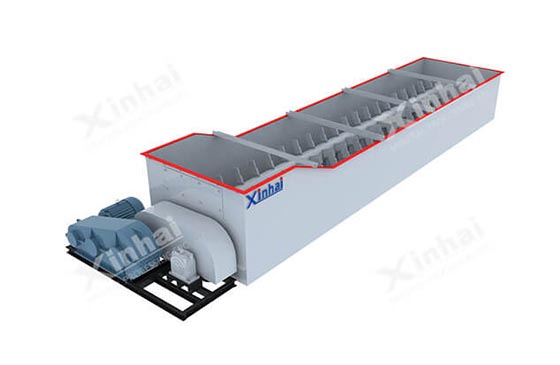 Gravity separation is based on the density and particle size of various minerals for separation. The shape of mineral particles also affects the accuracy of separating by density to a certain extent.

Manganese carbonate ore mostly adopts the combined process of dense medium and strong magnetic separation. The surrounding rock is discarded in the front section to restore the geological grade, and the later section is deeply beneficiated.

Magnetic separation is a method that uses the magnetic difference between minerals in a non-uniform magnetic field to separate different minerals. It is easy to operate, pollution-free, and low production cost. Strong magnetic separation has been applied to the beneficiation of weakly magnetic manganese ore for more than 20 years.

Manganese minerals are weakly magnetic minerals, and their specific magnetic susceptibility is quite different from gangue minerals. Therefore, the strong magnetic separation of manganese ore occupies an important position.

Since most of the manganese ore is carbonate and oxide minerals, the surface is easily wetted by water and has poor floatability. In addition, the flotation operation cost is high and the operation is difficult to control, so the flotation method is rarely used in industrial production.

The roasting of manganese carbonate ore mainly removes CO2 volatile matter and crystal water and turns it into manganese oxide, thereby improving the grade of manganese.

High-sulfur manganese ore is a metamorphic manganese sulfide-manganese carbonate ore. The purpose of roasting is to remove carbon dioxide and desulfurize.

The roasting of manganese carbonate ore is heating roasting, generally at 1000℃, and some up to 1150℃. The components in the ore generally do not melt or fuse, but only promote the decomposition of related components.

The above is the basic processing methods for manganese ore. In the actual production, you can refer this article to choose a basic process, but mineral processing test and technicians' advice are necessary too.

If you have any questions about this article or need more details, please contact our online customer service or leave a message below, we'll contact you as soon as possible.

1What Are the Processes and Equipment Used in the Manganese Processing?