Xanthate is a collector of thio compounds, and it is the most commonly used gold flotation collector for gold-bearing sulfide ores and oxide ores. Its chemical composition is hydrocarbyl dithiocarbonate, and the most widely used xanthates are ethyl xanthate and butyl xanthate. 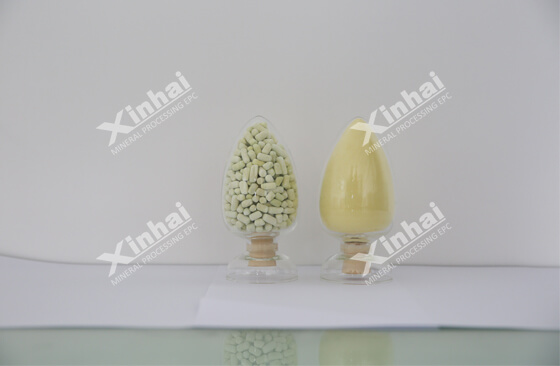 Xanthate is a pale yellow powder with a pungent odor, easily soluble in water, and easily oxidized. And it is easily deliquescence in the air. Therefore, the following two points should be paid attention to during the use and storage of xanthate:

One is to prevent the decomposition of xanthate, the pH value of the pulp should be controlled above 7. Second, the aqueous solution of xanthate is easily hydrolyzed, so the prepared xanthate gold flotation reagent solution should not be stored for a long time. In production, attention should be paid to the use of the liquid chemical configured on the shift.

Because dithiophosphate has a certain foaming property, the more free cresols in it, the stronger the foaming property. The chemical stability is better than xanthate, but because it is difficult to oxidize and is not easy to decompose under acidic conditions, it is more suitable for acidic pulp in gold flotation.

In the gold flotation process, minerals are loaded by foam, so the generation of bubbles of appropriate size and strength is an important condition for gold flotation.

When the foam has been scraped into the concentrate foam tank or for a longer period of time, it will not burst, which will affect the transportation and dehydration of the flotation gold concentrate.

Commonly used foaming agents in gold flotation plants include pine oil, oil 2, camphor oil, and cresol acid, among which oil 2 is the most widely used.

Pine oil is one kind of gold flotation reagent that obtained by dry distillation or distillation of pine roots, pine nuts, and pine nuts. It is a mixture and has unstable properties.

Being famous of the name of Oil 2. It is the most commonly used and abundant foaming agent in gold flotation concentrators. Oil 2 is a bright yellow oily liquid with a specific gravity of 0.9-0.91. In the flotation of vein gold, the amount of Oil 2 is 20-120g/t, most of which is 40-80g/t. Compared with other foaming agents, Oil 2 has the characteristics of strong bubble ability, uniform bubble size and proper viscosity.

As a gold flotation reagent, cresyl acid is also widely used in the practice of gold flotation. It is a by-product of the coking industry. It is easily soluble in water, has a weaker bubble ability than pine oil, is brittle and has good selectivity. It is suitable for preferential flotation of gold ore. And the dosage is generally 2-150g/t during gold flotation, the disadvantage is that it is toxic and flammable.

As one type of gold flotation reagents, inhibitor can reduce the floatability of minerals. Its function is to selectively interact with minerals to cause hydrophilicity on the surface of minerals. These minerals are inhibited during the flotation process. The other function is to saturate or dissolve the collector from the surface of the mineral to help capture. The active film of the collector acts and reduces the concentration of the active examples in the solution, making it difficult to form a collector film on the surface of the mineral.

In gold flotation plant, the commonly used inhibitors are: lime and cyanide.

Lime is an effective inhibitor of minerals such as pyrite and pyrrhotite, and can also be used as a pH regulator. Lime is easy to obtain and low in price. It is a commonly used inhibitor, and it is also an agglomeration agent for sludge.

Cyanide is a very sensitive inhibitor for gold and gold-iron ore flotation. In the gold dressing plant of cyanide leaching, attention should be paid to the influence and pollution of cyanide-containing wastewater on the flotation slurry.

Sulfuric acid and sulfur dioxide gas have an activating effect on the pyrite that has been kept.

The pH adjuster is a kind of gold flotation reagent that adjusts the dispersion and agglomeration of mineral mud by influencing the surface properties of minerals, adjusting the vitality of other medicaments, eliminating the influence of harmful ions.

Sodium carbonate makes the solution alkaline and is a commonly used pH regulator in gold flotation, which can adjust the pH of the slurry to 8-10.

Due to the high price, sodium carbonate is not widely used.

Last: 4 Types of Excavators: Which One You Should Choose?

Next: What Are The Placer Gold Mining Methods?